Comments about the deal

Our investors have understandably requested information on this year’s cancelled investment deal, and we thought this would be a good opportunity to expand on why this decision was made.

In the spring of 2022, we began looking for a new investor(s) who could support Change’s growth and provide industry expertise. Our management had many meetings with potential investors, and eventually, one stood out with a high level of interest.

Talks became more serious toward the end of May, and Change decided to suspend trading with Change share units on the Funderbeam platform and with CNG tokens on the Change app. This decision was primarily made on the basis that if information about the potential deal were to leak, it could affect the price of Change share units trading on the Funderbeam platform and CNG tokens. After providing relevant information to Funderbeam, the platform agreed and suspended the trading. The suspension of trading was done based on the information and knowledge available at that point in time.

The aim at the start of the process was to onboard an investor who would make an investment in Change and bring in industry expertise. Our management considered many alternatives regarding the deal and felt that the deal, at that point in time – which was in the end pursued – was the best for all investors and shareholders. The deal ultimately did not go through and was cancelled at the beginning of November 2022. There were several reasons for this, and the untimely FTX collapse did not help. The Estonian media has emphasised that Change management (particularly the CEO) pulled out of the deal, but the major reasons were rather a long-term ability to build the product Change has envisioned in the potential deal setup and the other party’s intention not to pursue the deal further. Despite Change’s best attempts to facilitate the deal, it did not happen. Change treated all shareholders equally and did not promise anyone special treatment, compensation, et cetera.

The price fluctuations of Change share units on the Funderbeam platform and CNG tokens on the Change app are public data. The proposal submitted by the potential investor was made based on a thorough analysis, including the overall market situation and the historical data of the Change share unit price.

Amid the positive feedback and encouragement to continue pushing forward, we’ve also received some negative criticism surrounding this cancelled deal – Kristjan, Change’s CEO, specifically has been mentioned as having potentially benefitted from the cancelled deal, casting doubts on the use of investments made to Change. While this is not the case, Kristjan did wish to bring full transparency to the issue moving forward:

‍“I’m sorry that these ideas ever had a reason to come up, and it’s understandable that some should be critical, especially in these turbulent times. The allegations surrounding any personal benefit to me from the cancellation are untrue. In 2021 I did sell approximately 2-3% of my shareholding in Change through my holding company (and to avoid any doubt, this is separate to the fundraising round Change had in 2021). In 2020, I’d also sold around 1% through Funderbeam. While we suspended trading, I did not directly or indirectly sell or acquire any Change instruments, nor have ever used any investments made to Change or Funderbeam for personal use and remain the largest shareholder”

The market we are in is taking its first steps to disrupt the world. Much like investing in crypto, investing in a crypto exchange involves risks. Change, Coinbase, and Robinhood have all shared a decrease in value during 2022, and this comes from a negative market trend. At Change, our team continues to work hard in recovering and pushing onward – the bounce-back will make us even stronger in 2023.

We’re giving away 10 free copies of The Bitcoin Wave written by Asse Sauga. Enter before May 15th for your chance to win.

We’re rapidly growing, but want you to be as much a part of this journey as possible

A simple, intuitive card to compliment your portfolio

More in the blog 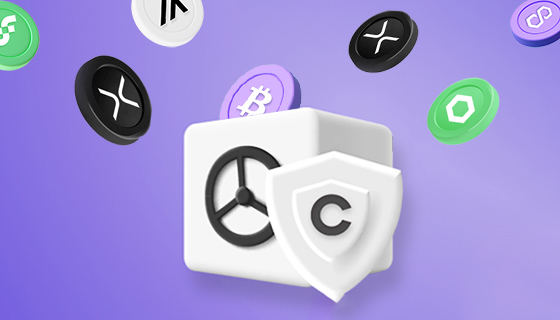 Thank you! Your submission has been received!
Oops! Something went wrong while submitting the form. Please try again
Get Started